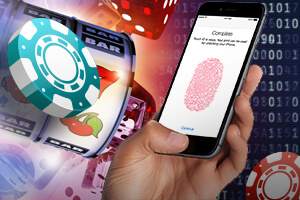 We’re warned left, right and centre to take the strictest precautions when it comes to our money. Thanks to new phishing scams and a steady collection of online fraudsters, many people simply refuse to take the risks associated with online transactions – even when playing at an established iOS casino on a trusted mobile casino app. But how much of this can we boil down to paranoia and how much is justified?

Well, while we can’t outright promise that you’ll never fall victim in the online world, the evidence simply isn’t strong enough to support theories about online transactions being unsafe – but we have to admit, with innovations like Apple Touch ID around, it sure feels more secure out there.

Anyone with an iPhone 5s and above will be familiar with Apple’s Touch ID function. While it doesn’t replace your phone’s passcodes, it certainly adds another level of security to all your functions – and since fingerprints can’t be ‘guessed’, some believe they’re a far superior form of security than any passcode could hope to be. It’s easy to activate and requires only a few seconds of you scanning your fingerprint on the home button on your phone. Once one or more of your fingerprints have been captured, your iOS device creates and saves what they refer to as “a mathematical representation of your fingerprint”. Once set up, you can unlock your phone and quickly approve transactions on any Apple app. That being said, is it really more secure than entering your passcode? Yes and no.

For obvious reasons, fingerprints are pretty darn difficult to ‘crack’ – they’re either yours or they’re not. Passcodes, on the other hand, can be. But remember, mathematical problems can be solved, and if your fingerprint is stored as an algorithm, it doesn’t make it impossible to figure out. Then, of course, there are the more unpleasant ways to come into possession of someone’s fingerprint – but we’re not going to get into any of those details right now.

Currently, minimal developers include the option of Apple Touch ID into their security systems. While web wallets like PayPal have added Apple Touch ID protection to be compatible with and functional in their app, they, along with Apple Pay, seem to be among a handful of developers who do. So what does this mean for you and the security you’ll experience at an iOS casino when making online transactions?

Almost every online account we have makes use of single-factor authentication, which is the same method used by Apple. If, however, both a passcode and an Apple Touch ID were required from you, this would elevate their security measures to multiple-factor authentication. That being said, the invention of Apple Touch ID seems to have always been more about convenience than security. Now, don’t get us wrong – we’re in no way saying that accessing a mobile casino app using an iOS device is not secure, we’re just saying that it’s pretty much the same as accessing a mobile casino app with any other device. Ultimately, security is something we all have to take personal responsibility for and Apple Touch ID simply offers iOS casino players another way to do so.