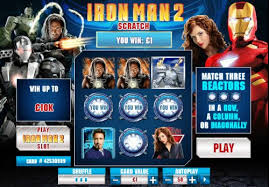 Sometimes there’s nothing more irresistible than an instant win, so what could be better than being able to get that thrill wherever you are thanks to mobile Scratch cards? Playing mobile scratch cards rather than buying the real deal saves all the fuss and muss of having to scratch of the foil, but maintains the suspense and excitement of uncovering each symbol through the physical aspects of touchscreen gaming.

Here’s a list of our favourite mobile Scratch cards, all of which can be found at Casino.com via iPhone or android devices:

This popular Scratch card features all of the most popular characters from the 2010 blockbuster Iron Man 2, including Iron Man, Whiplash, Black Widow and War Machine. A nice feature of the Scratch card is that even the buttons on the screen feel like something that could have been designed by Stark Industries.

If you’re a fan of Marvel’s heroes then you’ll love this Scratch card.

Inspired by the cult classic film Rocky, this Scratch card features Sly back in his original role as the famous boxing hero Rocky Balboa. Rocky must face some of his fiercest opponents of all time, Apollo Creed, Ivan Drago and Clubber Lang, in order to win you some serious cash!

The card features actual sequences from the movie for every scratch, making this a highly enjoyable Scratch card.

This loveable rogue has got his claws out again and you’ll need yours to reveal the winning squares in this nostalgic Scratch card. The idea is to find three identical images in the nine cells, in any order, with pictures including popular characters such as Inspector Clouseau, the little man and the Pink Panther himself.

Having gained massive popularity since its launch in 2012, Chicago Streets mobile Scratch card features the gangster scene of prohibition era Chicago, along with its Mobsters and their molls, and all of the 1920s style cars and weapons.

This adorable Scratch card is much cutesier than the other games on this list, featuring lollipops, angels, gifts, balloons and teddy bears. The idea is to match three angels in a row and, if you do, you’ll receive heavenly rewards. It may not be to everyone’s tastes but it makes a change from most other mobile Scratch cards that appear to be aimed much more at a male audience.

Specs for these top Scratch cards:

Visit Casino.com on your mobile today to play all of these top Scratch cards and many more of the best mobile Casino games around today. New players will receive a fantastic Welcome Bonus of up to £3,200 so don’t delay, head to Casino.com today!