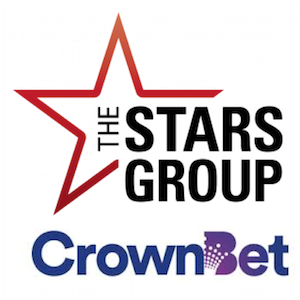 Formerly known as Amaya Gaming, The Stars Group has gone from strength to strength since it rebranded its operations to reflect its most successful online poker brand. Now, the Canadian firm have acquired yet another big iGaming name that will further its growth strategy, announcing the completion of its purchase of Australian betting operator CrownBet.

The Stars Group has reportedly signed a deal to acquire CrownBet Holdings Pty Ltd for a consideration of $117.7 million. The firm will receive a 62% equity interest share in the Aussie betting and gaming behemoth in a deal that automatically makes The Stars Group the majority owner of all the operator’s businesses.

Current CEO To Remain In Role

The Stars Group has since confirmed that the transaction has been finalised and completed, noting that it made the purchase entirely in cash. The acquisition was funded through cash on Stars Group’s balance sheet, with the agreement entitling the company to select the majority of directors on the CrownBet board.

It is also important to note that CrownBet CEO Matthew Tripp will remain in his executive position at the company under its new majority ownership. Tripp will continue to operate CrownBet’s Australian business divisions for the foreseeable future, according to The Stars Group’s recent press statement on the matter.

Rumours over a possible sale of business have been circulating since the end of last year for CrownBet. It was at this time when Aussie casino resort operator Crown resorts sold a majority 62% share in its business to Matthew Tripp – CrownBet Holdings’ current chief executive officer.

Global sports betting operators William Hill and Paddy Power Betfair were reportedly among the parties interested in purchasing the business, with both of them holding talks with CrownBet in November last year. However, it now seems as though The Stars Group will be the firm to add CrownBet to its growing list of premium gambling brands.

Established in 2014, CrownBet is one of Australia’s largest online bookmakers, earning gross annual revenues of over AU$204 million and posting impressive EBITDA of AU$7.9 million at the end of last year.

In a statement explaining the new announcement, CEO of The Stars Group Rafi Ashkenazi noted that his company is excited to be entering the regulated Australian betting market through its CrownBet acquisition. He also added that CrownBet is one of the fastest growing online sportsbooks in the country, thanks to its superior technology, top management team, unique business partnerships, and innovative betting loyalty scheme.