The Heat Is On Slot Release 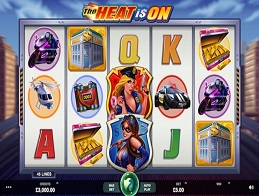 Microgaming, the world’s best known developer of mobile casino slots and games, has announced the pending release of three exciting new games. The trio of slots will be released throughout this coming March, including titles like Pollen Party and Emperor of the Sea. Also among them is the highly anticipated The Heat is On mobile slot, with a dynamic cop chase theme that is expected to keep players entertained for hours.

Microgaming’s latest mobile offering will be released across desktop and mobile platforms on Wednesday, 22 March. The slot will be optimised for play on iPhones and various iOS operating systems as well, including those used by most iPad models.

Chase Down A Cat Burglar In Microgaming’s Latest Mobile Slot

The Heat is On kicks off over 3 reels and 3 rows, with 45 paylines in total. Here, players will meet the slot’s first character – a sly and sexy female cat burglar who goes by the name of Selina. Selina is after the largest bank safes and gold reserves in the city, but hot on her heels is a Playboy Bunny’esque blonde cop to make for some guaranteed gaming excitement.

The heat will definitely be on for players of The Heat is On mobile slots as they discover the various lucrative symbols on the new game’s reels. There are the two gorgeous main characters, helicopters, cop cars and motorcycles, making for quick getaways for both the burglar and her pursuer.

There are not just one, but two separate Wilds in The Heat is On as well, offering the chance to complete winning symbol combinations and award generous cash wins when they appear. Three or more Scatter symbols will trigger Scatter pays, even when the free spins are not.

The Heat is On Scatters will appear partially stacked on reels 2 and 3 of the base game, where they can trigger a whopping 80 free spins in a themed bonus game.

David Reynolds, the Games Publisher at Microgaming, has expressed his company’s excitement around their latest slots release in a recent statement. Reynolds said that March will bring an incredible range of new games to his company’s players, each of which will offer them something thrilling and unique.

The Heat is On, he said, is a ‘perfectly balanced’ slot that offers an innovative Wild feature, immersive base game play, and a free spins feature with great winning potential. There’s something for everyone in Microgaming’s latest batch of mobile slots, Reynolds concluded.