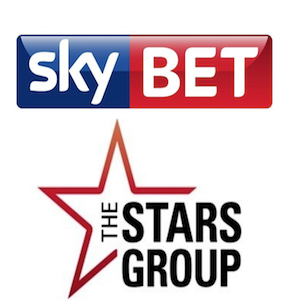 Canadian iGaming giant The Stars Group is well on its way towards purchasing Sky Betting & Gaming (SBG) from CVC Partners. The deal is on the table for a very cool $4.7bn and will comprise of all cash and stock assets. The purchase price will consist of $3.6bn to be paid in cash and the remainder to be settled by way of newly issued common shares, which will tally to approximately 37.9 million newly created shares in total.

The newly issued common shares will ultimately make up approximately 20% of issued and outstanding common shares under control of the Stars Group and will give effect to the transaction as well as anticipated further acquisitions of CrownBet and William Hill Australia.

Stars Group’s Chief Executive, Rafi Ashkenazi, has described the deal and acquisition as being a landmark moment in time for the Stars Group, since Sky Betting & Gaming operates one of the world’s fastest growing sportsbooks in addition to being one of the United Kingdom’s leading and most progressive gaming and sports betting providers.

Ashkenazi went on to say that the betting and gaming portfolio and incorporated sportsbooks would constitute the perfect complimentary partner to Stars Group’s existing Poker platform, which is widely regarded as being the leading Poker platform in the gaming industry.

Stars Group is now in the ideal position of being able to operate two avenues of low-cost betting services, which will in turn enable the group to offer increased wins to customers.

In order to finance the acquisition deal, the Stars Group has successfully secured debt financing of around $6.9bn which will comprise of $5.1bn in term loans, $1.4bn in unsecured notes and the balance of $400m to be financed by means of a revolving credit facility.

The funded proceeds will ensure that Sky Betting & Gaming’s existing debt portfolio is completely cleared out and settled in full, as well as well as to refinance the group’s existing term loan.

The deal is expected to be finalised by no later than the third quarter of the current year.

Market Leaders In The UK

Sky Betting & Gaming’s Chief Executive, Richard Flint, has said that SBG has enjoyed a fantastic last few years and that the company was grateful towards CVC and Sky for the support that it had enjoyed in the journey towards becoming one of the UK’s leading online gaming operators.