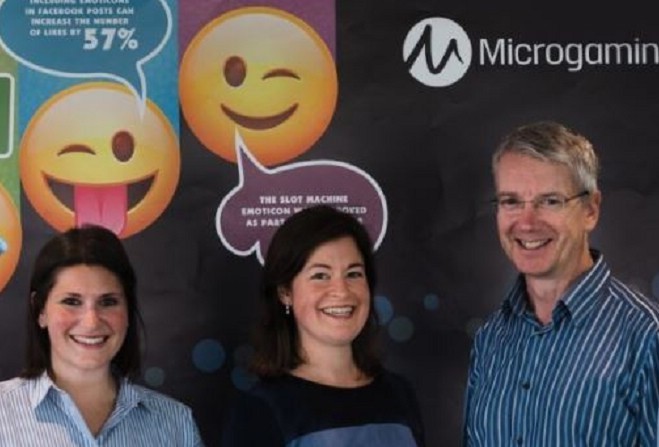 There has been a flurry of activity among mobile slots developers over the past few months, with emojis being the most popular theme across desktop and mobile platforms alike. Now, Microgaming has joined the movement with their latest new slot launch – the on-trend Emoticoins slot game.

Microgaming’s staff, who felt that the hugely popular emoji phenomenon would make an excellent topic for a new slot, particularly for millennial players, pitched the inspiration behind Emoticoins.

The slot boasts 5 reels and 30 paylines, and was born of an idea pitched by Rob Mercer and Anna McChesney, two employees at the UK-based developer’s Microgaming Idea Factory. The Idea Factory is a staff-powered innovation programme by the company, which won the coveted Spark Award this year.

Anna and Rob Created Slot’s Idea Through The Idea Factory

PR Manager for Microgaming Anna McChesney commented on the launch of the slot, noting that as a marketer, to her, the use of emojis in communication and social media is highly interesting. She noted that emojis have practically become a universal language, with 92% of the world’s online population using them.

Thus, developing a game based on them has automatically appealed to the entire demographic of casino operators’ players, she said, noting that the idea for Emoticoins was submitted to the Idea Factory in a contest in June last year.

Both Anna and Rob highlighted how emojis are used in today’s world, saying that using them in Facebook posts can increase the number of likes gained by over 57%. The Emoticoins slot idea was immediately sponsored by Business Intelligence when it was pitched, while Anna and Rob collated a unique set of emojis that would compliment the theme of the game.

Enterprise Solutions professional Rob Mercer commented that it is amazing to see what the Microgaming team has done with the research his firm has gathered. He also said that Enterprise loves the completed game.

Emoticoins has officially been launched for desktop and mobile devices, and boasts two new Wild bonus features and free spins. There are up to 10 free spins and a 92,000 coin jackpot up for grabs in the thrilling new game, along with Wild Blasts and guaranteed cash wins for all.