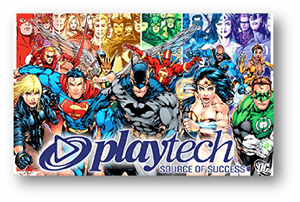 In October last year, major iGaming developer  Playtech announced that they would soon be launching a series of slots based on the classic Batman TV series. Now, the developer has a new plan: to create dedicated slots for all future DC comic-based movies and television shows.

After the massive success of the Batman mobile optimised slots, Playtech has decided to continue giving DC comic characters their own unique treatment. Thus, through 2017 to 2019, Playtech’s iPhone slots players can expect countless exciting DC licensed online slots from the behemoth UK-based provider.

The Batman series and the Green Lantern film have both inspired mobile slot games from the developer. However, the Superman and Man of Steel slots have yet to hit iPhone casinos, but Playtech has revealed that they are in the pipeline.

Playtech CEO Mor Weizer has noted that the DC slots licenses have been a massive deal for his company, which is delighted to have an exclusive content license for the brands with Warner Bros. Consumer Products.

Batman vs. Superman is rumoured to be the first DC mobile slot that Playtech will unveil in 2017. Playtech haven’t yet announced the order in which their new range of slots will be released, but with the third release scheduled for November this year, the developer will likely draw inspiration from existing DC films.

Next up will likely be the Suicide Squad iPhone slot, modelled after the hit blockbuster that grossed over $700 million in the box office. Featuring the Joker, Harley Quinn and other major DC characters, the Playtech slot is expected to be just as much of a smash hit as the film was when it hit cinemas earlier this year.

Finally, the Justice League slot will likely be the release scheduled for November. Branded film slots are often tied in with the releases of the films themselves, so this could serve as a big hint as to when players can expect both the slots and the official DC movie.

Progressive Wins In Store For Players

Players are already wondering whether Playtech doesn’t have more DC-branded slots up its sleeve – a Wonder Woman iPhone slot, for example, seeing as the movie will be released this June. Perhaps... but Playtech has made no official announcements.

For now, players can rest assured knowing that plenty of DC-branded iPhone slots are soon to come, and that each one will be tied to an impressive Playtech progressive jackpot network, too!