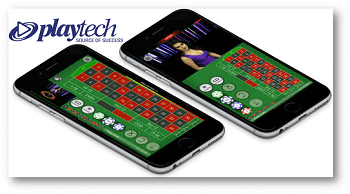 Playtech has established itself as one of the foremost brand names in the fields of gambling products and services for the international gaming industry. In the most recent casino news, Playtech has just announced that it will soon be rolling out a new Live Mobile Roulette game for players at its mobile casinos across the world.

Playtech’s new Live Mobile Roulette has already been through rigorous testing and analysis over the past few months. Despite the new game being launched just days ago, it has already received much praise and many positive reviews from mobile players and operators alike.

The new live mobile game offers iPhone and iPad players the opportunity to play Roulette in both landscape and portrait modes, while it is fully optimised for iOS operating systems, and offers a full view of the spinning wheel with players still being able to see their bets as well.

Playtech has also added innovative new features to their Live Mobile Roulette release, making its interface easy to navigate and clear. Well-positioned pay buttons and a personalised Roulette table view have also been included in the software.

The game was launched recently as an HTML5 mobile Roulette game, and turned out to be an instant hit with iPhone players. Just 48 hours after the game was launched across the developer’s operator network, most of their players migrated to the brand new version of roulette.

The developer has pointed out that the new game is busy increasing player engagement levels, and also encouraging longer gaming sessions across mobile devices. It has also considerably boosted the revenues generated for Playtech’s licensees who offer the game.

Kevin Kilminster, the Head of Innovation at Playtech Live, has commented on the launch, saying that his company choose to upgrade their mobile Roulette game, as it had always been their primary product.

Kilminster also mentioned that he had worked alongside numerous gambling operators in order to develop a game that would be just as popular as the highest-performing mobile Roulette game on the market today.

The game has been very well received by iPhone players, and the rapid switch of players from the older version to the new release indicates promising things for the software.

Playtech is now focussing its attention on launching a second live mobile game – Blackjack. The game is expected to appear at iPhone mobile casinos before the year is done, offering players enhanced features and gaming options.