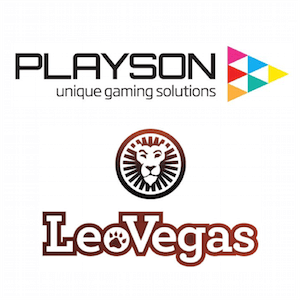 Playson certainly has proved its worth as a stellar casino software developer. It’s no doubt for this very reason that the team has just been welcomed to the LeoVegas fold thanks to a new partnership agreement between the two entities. According to the provisions of the content supply agreement, Playson’s entire portfolio has been ported to the LeoVegas platform. Also, in addition to the actual games, LeoVegas players will also benefit from a range of Playson-developed promotional tools and applications.

Some of the developer’s games include Double Chance, Book of Gold, Wild Warriors and Mighty Africa. Its flagship range of slots, the highly enjoyable Timeless Fruits, is also part of the package. Some of the engaging titles in the range include Super Burning Wins, 40 Joker Staxx and Sevens & Fruits.

Playson’s games all come kitted with spectacular special features; jackpots, free spins, special bonus rounds; its all there to enjoy. All of Playson’s games enjoy full certification in the UK, Spain, Italy, Malta and also Sweden.

The vehicle for integration has been the award-winning Relax Gaming platform. Most of the games were made available to players on April 25, and the developer has said that more will follow very soon.

Content supply partnerships form the backbone of the iGaming industry.

Achievements Are Made Of This

Playson’s Managing Director, Ivan Farrugia, refers to the partnership with LeoVegas as nothing short of an astonishing achievement for the developer. Farrugia said that it was an opportunity for the developer’s games to be showcased to a worldwide audience and that it is one that is regarded as second to no other.

LeoVegas is a prominent role-player in the worldwide iGaming market. The operator is regarded as one that upholds a culture of social responsibility and is an astute advocate of regulation and of playing it above board and by the book. LeoVegas has over the last couple of years applied its resources in an effort to work towards the good of the greater casino community. The operator has become a legend in its own right and is supported by millions of players all over the world