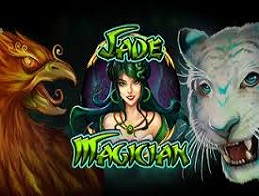 The new year has already seen plenty of interesting mobile slots releases, and now it’s developer Play ‘n GO’s turn to make headlines. The developer’s latest release, Jade Magician, has been something of a surprise to their veteran players, going back to basics with traditional bonuses and appealing graphics.

The Jade Magician mobile slot is set for release on the 26th of January. As well as an option for online players, iPhone players will also be able to try out the mobile-compatible version of the game on its release.

Play ‘n GO has released a sneak peek of the new slot, and players are already sharing their opinions over the seemingly simple game play. The graphics are crisp in shades of charcoal and green, and the Jade Magician herself forms the main focus along with a timeless Asian martial arts theme.

The action in Jade Magician takes place over 5 reels, 3 rows and 15 paylines, with a minimum bet of 0.15 and a maximum stake of 75.00 per spin. The symbols here include eagles, dragons and glowing white tigers, along with a variety of shining jade gems which offer different payout values.

The dragon is the most valuable of these symbols, awarding up to 2,500 coins for landing 5 of a kind. A 2x Wild multiplier is also attached to all Wild wins, and the Wild symbol itself will substitute for all other symbols except for the Jade Magician Scatter.

The Jade Magician herself is the Scatter symbol, and landing just 2 on the same spin will trigger the Second Chance feature. Here, players will choose 1 of the 4 symbols on display for a cash prize, or reveal the lucky hidden Bonus symbol and trigger the slot’s free spins.

There is another way to trigger the Free Spins game: just land the Scatter symbol on reels 1, 3 and 5 simultaneously. There are 5 free spins on offer to begin with, and the Scatter also transforms into an additional Wild symbol until the feature has ended.

It’s also possible to win another 5 free spins by landing 3 more Scatters on reels 1, 3 and 5 of the feature. On the other hand, 1 or 2 Scatters will award players 1 or 2 extra free spins. The feature is retriggerable up to a total of 50 free games.

With medium variance game play and simple but effective bonus features, the Jade Magician mobile slot is set to be one of Play ‘n GO’s most popular mobile offerings yet. So far, experts are reminding players to make sure they trigger the Free Spins feature for the best chance of winning!