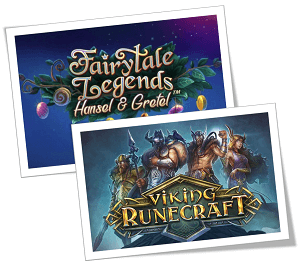 Thanks to the Easter season, April has been a busy time for many of the world’s best mobile slots developers. Plenty of new iPhone slots have hit the market this month – although not all of the new releases feature the Easter bunny and baskets of chocolate eggs.

Viking Runecraft and Fairytale Legends: Hansel and Gretel are two of the most dynamic new slots to hit the market this April, and both games will soon be available for iPhone casino players. Developed in HTML format, both slots will be perfectly compatible with all iOS versions for plenty of real money mobile fun.

Viking Runecraft Takes You On a Norse Adventure

Viking Runecraft is software developer Play ‘n GO’s latest mobile slots creation. Based on the legendary Vikings of Scandinavia, the slot features an unusual structure with 7 reels and 7 lines. The symbols on the reels range from colourful runes to Viking helmets, axes and mjolnirs, with matching symbols collapsing and new icons filling their place for consecutive winning potential.

The aim in Viking Runecraft is to match certain symbol combinations to climb various levels, with players eventually reaching the gods’ level. Each Norse god – Thor, Odin, Heimdall and Freya - can offer up to 5,000x multipliers, along with bonuses like extra Wilds, stacked Wilds, sticky Wilds and more.

More matching symbols can also trigger a myriad of other bonuses, including Charge of Destruction, Fury of Fenrir, Judgement of Jormungandr, Scorching of Surtr and the Lure of Loki. There is even a Runes of Valhalla Bonus game which is triggered by collecting various runes throughout the game.

The second exciting new mobile slots release of the month is a NetEnt creation. Hansel and Gretel is the second slot in the Fairytale Legends collection, which promises classic fairytale fun across 5 reels and 20 lines. Based on the traditional Brothers Grimm tale, the slot features the brother and sister pair who are trying to find their way out of an enchanted forest and finding big riches as they go.

The bonus features in NetEnt’s latest slot are numerous, and the base game alone offers the randomly triggered Fairy Wonder Spin, Fairy Wild Spin, and Fairy Surprise features. Then there are Stacked Wild Re-spins to enjoy when Wild stacks land on reels 2 and 4, and Bonus treasure chest symbols offer up to 30 free spins.

Both of these slots have been developed for mobile, and they are sure to become favourites with iPhone players across the globe.