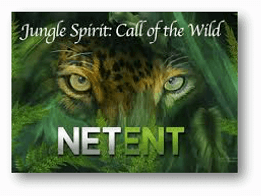 Among the many slots developers that have released brand new slots and casino games for 2017 is NetEnt, Sweden’s most prolific software provider. In NetEnt’s latest news, the famed developer is now set to release yet another new mobile slot, which will soon be available for iPhone casino players to experience.

The new slot is titled Jungle Spirit: Call of the Wild, and offers something that will definitely appeal to fans of nature-themed games. The Jungle Spirit mobile slot will hit Net Entertainment casinos on 21 March, and in the meantime, all of the slot’s most important details have been released in a special sneak peek video.

Jungle Spirit: Call of the Wild will play out over 5 reels and the innovative 243 ways to win in place of paylines. Playable from 20c per spin, iPhone players will be able to enjoy a specially optimised version of the slot for mobile phones and tablets.

NetEnt’s latest offering seems to boast some impressive 3D graphics, judging from the images released in the developer’s sneak peek. There will also be 3 unique bonus features on offer, as well as a wild selection of tigers, crocs, cobras, bears and elephants appearing as base game symbols.

The selection of exotic animals on the reels is only part of the appeal of the new slot, however. Each of these symbols are involved in the Symbol Expansion feature too – a never-before-seen bonus feature in which a butterfly symbol that forms part of a winning combination will instantly expand to fill their entire reels.

Although butterflies are definitely not considered the king of the jungle, they do lead to several big bonus features in Jungle Spirit: Call of the Wild. Aside from the Symbol Expansion feature, there is also a Butterfly Boost bonus that will be randomly triggered in the game. Here, butterfly symbols will fill up to 3 symbols on the reels, adding to players’ chances of scoring cash wins.

Finally, Jungle Spirit: Call of the Wild also boasts a free spins feature with up to 50x cash wins and between 4 and 20 free games on offer. Players will need to pick an animal to win their free spins, and each feature will only offer that specific animal on the reels along with a selection of playing cards.

Better still, as well as these symbols acting as extra Wilds, the number of ways to win will also increase to a whopping 1,024 in the bonus games!