Mobile Gaming Peaks Around The Holidays 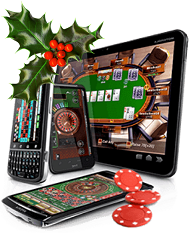 Players that don’t pick up their smartphones or tablets and play the latest mobile games over the holiday season are truly in the minority, according to extensive research on the current rise of mobile gambling.

According to the contents of a new study by mobile marketing automation firm Tapjoy, the Christmas period is a massive driver of mobile game engagement, with millions of players signing in to enjoy some thrilling real money fun from their iPhones or other mobile devices of choice.

Tapjoy recently conducted a survey of 20,929 mobile gamers in EMEA and the USA, the results of which came as no surprise for licensed mobile casino operators. The firm discovered that eight out of ten (or 80%) of the respondents reported playing mobile games more often over the holiday season – a massive number in any expert’s esteem.

4 Out Of 5 Play More At Christmas

Over a quarter (28%) of respondents have reported playing an extra 1 to 2 hours of mobile games every day around Christmas, while a further 19% of the survey’s members admitted to playing between 3 and 4 extra hours daily on their games of choice. In total, just one in five respondents said that their playing time does not increase at all during the holidays.

Furthermore, the study also revealed that many mobile players download new games during the festive season. As many as seven in ten respondents also noted that they intend to add new games to their phones and tablets as the holidays draw closer.

People are playing more mobile games than ever before – but according to new research, they are also making more in-app purchases too. Data released by Sensor Tower revealed that player spending on premium mobile games and in-app purchases in the Apple App Store came to a total of $8 billion worldwide in Q3 this year – a massive increase of 29% year on year.

Mobile gaming spend on the Google Play platform during Q3 2017 also surged, reaching a huge sum of $4.5 billion and increasing 22% over last year’s figures. However, with almost double the spend and plenty of research to back it up, iPhone gaming still appears to be king among passionate mobile players around the globe.