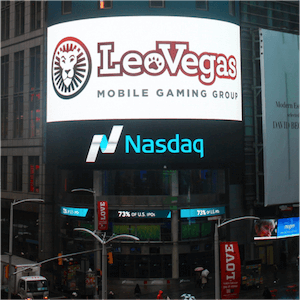 LeoVegas, the international mobile casino leading company,  has now been officially approved for listing on the Nasdaq Stockholm regulated stock market, according to recent news reports. The listing committee of Nasdaq Stockholm revealed the news after the decision was made to add LeoVegas to its roster.

The iGaming behemoth has also confirmed via press release that February 2, 2018 will be its last formal day of trading on the Swedish First North Premier stock market index. The native Swedish firm’s first day for trading on the Nasdaq Stockholm market was scheduled for Monday, February 5.

Approval for Nasdaq listing is subject to fulfilling standard legal conditions, as has been reiterated by the listing committee. However, LeoVegas has noted that it expects to be able to fulfil any relevant conditions by the first day of its Nasdaq Stockholm trading career, setting financial regulators’ minds at ease for now.

According to economic experts, the new listing will allow LeoVegas to generate cash income to contribute towards future merger and acquisition activities. It will also allow both local investors and international investment funds to place their money into the organisation.

Speaking about the listing approval, LeoVegas Group CEO Gustaf Hagman has commented that the change in listing can be attributed to his company’s team and their strong efforts to turn the firm’s goals into reality. He took the opportunity to praise his team for their hard work, which has brought the company to its new milestone.

Hagman also noted that the change in listing will strengthen his firm and give it an even more positive standing in its dealings with authorities, partners and licensors. The listing will also make LeoVegas more accessible and appealing to institutional investors in Sweden and beyond, according to the CEO, who stated that the approval is big news for LeoVegas in its quest towards continuous growth.

Based in Sweden, LeoVegas is an international mobile gaming company with focus on the provision of online casino games, sports betting markets, online cash lottery games and more. The firm’s wide range of mobile products and innovations have made it a leader in the provision of mobile iGaming services, which its recent Nasdaq Stockholm listing is now testament to.