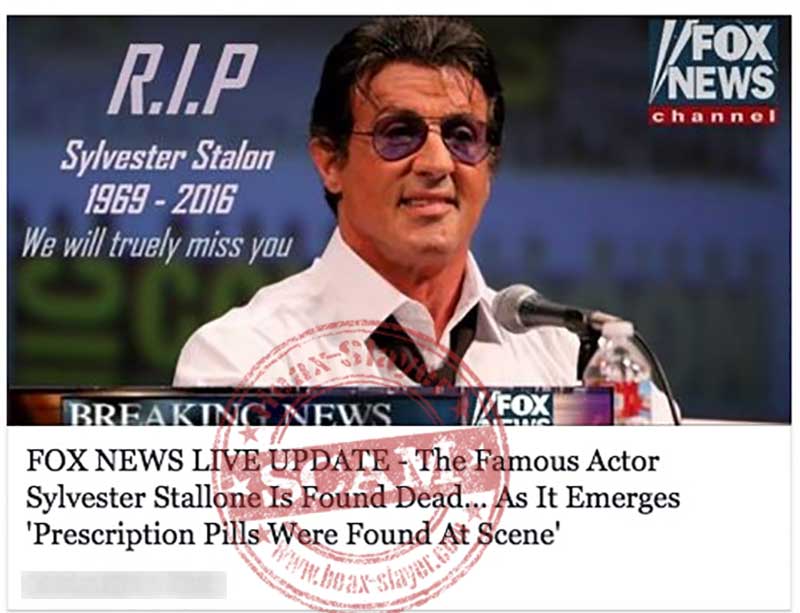 Many were left heartbroken recently when Internet news sites announced that popular actor and film director Sylvester Stallone had passed away. But this heartbreak soon turned to annoyance when it was revealed that the actor was not, in fact, dead, but alive and well. It was just another instance in which fake news had been spread far and wide without being fact checked.

In this era of internet news, where all that is required to get the world paying attention is to tell a lie, just how does one truly know the difference between lies and truth? And more to the point, what is to be gained from spreading false news?

Let’s take a closer look at the phenomenon of false news in the modern world of the Internet.

Celebrities Who Have “Died”

Sylvester Stallone is not, of course, the only celebrity to have been falsely declared dead. In fact, the list of celebrities who have had to declare themselves still living is a long one. Britney Spears has famously been falsely declared dead on two separate occasions, first back in 2001. Although, in this early case, it was a radio station that reported her death, and not a social media website. The DJ who delivered the report was quickly fired after it was revealed that the report was nothing but a hoax.

In the second case the drama came from the official Sony Music Twitter account. Sony later claimed that the Tweet was the result of a hack.

Other celebrities that have fallen victim to such hoaxes include Miley Cyrus, Betty White, Norman Reedus, and many more. The celebrities have been quick to clear up the misunderstandings in all cases, but the question still remains as to why such hoaxes are still so popular, given that they do nothing but cause confusion.

The most obvious answer to the question is that such tragedy is the fastest way to get a massive amount of attention. The world is full of websites desperate to generate traffic, since traffic translates to business and money, and a vast amount of traffic in a short amount of time is essentially like hitting the jackpot at an online casino. It has even been argued by some that celebrities likely initiate reports of their death on purpose, as a quick way to remind people that they are still around.

This may or may not be true, but it cannot be denied that Sylvester Stallone has likely not received so much attention, in such a short period, in a very long time. And let’s not forget that he has two new movies coming up in the near future.

Either way, any website, Twitter account, or Facebook page looking for fast attention need only start a hoax about the death of a famous celebrity, and get massive attention very quickly. That the media account will likely be negatively branded when it breaks that the story is a hoax is another story altogether.

The propagation of false news has led many to brand the Internet as a place of nothing but disinformation. And for the most part there is some truth to this. It should never be forgotten, however, that there are many positives to the world of online news, and the Internet in general.

For starters, the incredible vastness of the Internet means that a person can search multiple news items from a number of different news outlets in a very short space of time. As to the credibility of these news sources, it really is up to the news seeker to determine. But, the point remains that there will always be multiple choices, all of which are extremely accessible. If you read something shocking it may be best to check out a trusted source just to make sure you don’t become guilty of spreading fake news yourself.