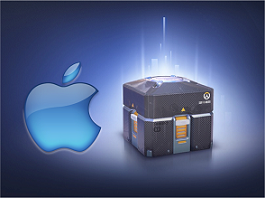 Mobile games marketed on the Apple App Store will soon be facing much stricter regulations of their gambling-related features. Apple has now confirmed that mobile game developers will be required to publish the odds of their in-game loot boxes, giving players a much clearer picture of what they stand to gain by using them.

The odds in question will give players the information they need as to what their chances of winning certain loot box prizes are whenever they make in-game purchases. Apple hopes that this measure will provide a solution to loot box opposition, which argues that players have no idea what their chances of winning certain add-on features are when choosing to purchase the mystery boxes.

This move by Apple clearly acknowledges that there is a gambling element in loot boxes. Developers have argued that, as a prize or reward is always guaranteed when purchasing the boxes, they do not truly constitute gambling – but regardless, a massive uproar from players and regulators has created the need for more careful and transparent measures in this department.

Apple’s new guidelines have stated that apps offering loot boxes (or similar mechanisms that offer random virtual prizes) must now publish the odds of receiving each item on offer to players before a purchase can be made.

In 2017, loot boxes became one of the most controversial topics in the gaming world after players and national gambling regulators alike began to argue that they offered a form of gambling to minors and other at-risk individuals.

Loot crates are digital ‘treasure boxes’ that contain items that can give players the upper hand in their game of choice, including weapons, armour and power-ups. Modern games have started to allow players to purchase these extra crates for real money, but the true issue lies in the fact that players do not know what the box contains until they purchase it.

It was with the release of Star Wars: Battlefront II that the issue reached its pinnacle, with tech giants and regulators across the globe formulating new laws governing how the boxes should be offered to players. Now, even Apple has joined the movement, warning that apps will quickly be removed from the App Store if they do not comply.

And although the Entertainment Software Ratings Board has decided not to restrict games based on their use of loot boxes, the widespread new rules on their provision will allow players to make more informed choices about the purchases they make before they risk their money.