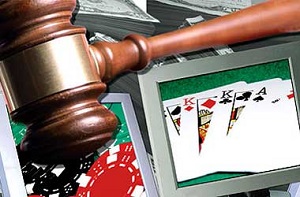 When thinking about gambling laws, it is paramount to have a clear understanding of the definition of gambling. The dictionary defines gambling as: (1) the act of playing at a game of chance for money or other stakes. (2) the act or practice of risking something important by taking a chance or acting recklessly. While being armed with a clear definition should be enough; unfortunately, a definition can become the victim of interpretation. Relative to gambling laws, shades of gray quickly enter the picture.

In Largo, Florida, an ATF raid was instigated surrounding an arrangement between a local poker club and a local bar. With the sole intention of increasing business traffic, the bar was giving token gifts to patrons who participated in the games. No details were mentioned relative to the value of the token gifts or in what form they appeared. ATF officials cited Florida law which defines gambling as “any game that permits players to win something. . .even if they don’t have to ante up.”

North Carolina has recently become a popular venue for video sweepstakes cafes many of which are owned and operated by out of state entities. The North Carolina Supreme Court is currently in discussion addressing its right to declare all forms of gambling to be illegal Considerations yet to be addressed are: proposed regulations regarding the location of these cafes in proximity to schools and youth centers, limitations on the number of machines cafes may operate, whether operational fees and taxation should be at the discretion of the state or localities and what if any percentage of cafe revenue should benefit gambling addiction treatment.

In Delaware, there is a move to rein in the use of electronic gaming machines by American Legion posts for the purpose of organizational fund raising. According to Delaware law, gambling includes any machine into which coins are inserted and something of value is dispensed dependent on chance. This begs the question, how many supermarkets and shopping malls contain machines offering prizes such as stuffed animals, and dvds obtained by coin insertion? It is interesting to note that no mention is made relative to the application of the dictionary’s second definition of gambling to horse racing in light of the fact that Delaware’s Dover Downs is one of the most popular horse racing tracks in the United States.

Recent activity by the Massachusetts Gaming Commission has paved the way for three casinos to be erected in yet-to-be-selected localities. According to the commission’s proposal, the location of these casinos hinges on the licensing of horse racing tracks since the casinos will be located in conjunction with them.

While the legalization of gambling in the United States is still waiting in the wings off stage, many senators and congressional representatives feel there are issues which should be addressed before any bill reaches the desk of The Oval Office such as what right the Federal Government has to regulate what an American citizen can do in the privacy of his/her home.