Following an announcement by Facebook in January 2018 that it would no longer allow adverts for cryptocurrencies on the site, the budding industry was hit by a more serious blow in March, when Google announced that it would be banning all cryptocurrency adverts from June. There’s also an unconfirmed rumour that Twitter is about to follow suit - a rumour which Twitter has failed to deny.

The official reasons given by Facebook and Google for the advertising bans is customer protection - along with cryptocurrency ads, Google is also banning ads for initial coin offerings (ICOs), wallets, binary options, foreign exchange markets and contracts for difference. These are all ‘speculative financial markets’ in which scams have cropped up over the past few years.

Bitcoin, the most famous cryptocurrency to date, saw a 10% drop in value after Google’s announcement. But it’s the volatility of Bitcoin that is partially responsible for Google’s action. Last year, in furious speculative trading, the cryptocurrency hit a peak value of almost $20,000 per Bitcoin, before dropping to its around $8,800 by March 2018. Those kinds of peaks and troughs can make money for some, but they also create a lot of losers.

Then There’s The Scams

Because the cryptocurrency market is largely unregulated across the world, they’re a ripe playground for scams. It is still fairly easy for nefarious operators to set up an ICO, take money from a range of investors, and then disappear with the cash, leaving investors defrauded. There are plenty of other tricks and scams available via contracts for difference and other financial services, especially when online and unregulated.

So in refusing all advertising from these sources, whether they are legitimate and regulated or not, Google is in fact acting in the best interests of some customers: the easily scammed. But a blanket ban is more than an inconvenience to users trading with legitimate operations; it has the potential to throttle an important emerging market. There are already a huge number of online entities, and some offline too, that accept Bitcoin, and everyone from leading online casinos to Shopify and Microsoft view this cryptocurrency as a valid payment option.

The nanny-state approach, which Google is spinning as ‘responsible’, also leaves the global giant open to accusations of collusion with entrenched interests and throttles those who are acting above board. 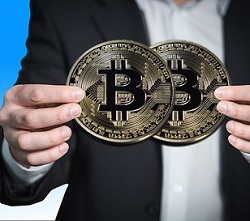 Google; Facebook; Twitter: there’s no denying that these companies are giants of the modern business world. They may have started out as plucky underdogs challenging the big guys, but now they are the big guys - Google already has an unsavoury reputation for hardball tactics to shut down competing (and some say better) search engines.

So even if they do have the best interests of their users at heart, a blanket ban on all cryptocurrency adverts looks like gatekeeping. As major powers in modern communication, these companies all have multiple ties to established financial institutions. And it is those institutions that are having their monopoly on money challenged by cryptocurrencies and blockchain startups - is it any wonder that operators in the cryptocurrency industry are crying foul, and accusing Google and Facebook of trying to shut them down?

Too Big to Go Away

The genie is out of the bottle now, however. The Blockchain concept - that there are ways of storing, tracking and exchanging value without requiring a central bank to issue money - is an idea whose time has come. It’s one of the unforeseen benefits of computers with global connectivity that has only recently come to light, but once people understand the value, it will be unstoppable.

Where consumers need the help of multinational corporations and national governments, is in regulating this process enough to make it safe and secure for investors, without trying to turn it into another capitalist system that funnels value upwards to the wealthy, which is the core problem with traditional money systems based on usury.

Until that environment exists, though, it looks like Google and others will continue trying to swat a fly with a sledgehammer.