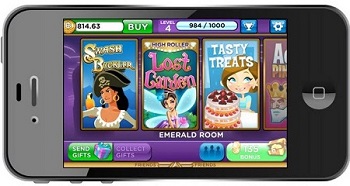 From Facebook to iPhone, the games are here. No longer is a desktop or a laptop needed to enjoy games because the casino is just a touch swipe and tap away. Blitzo Games has just announced the debut of Slotspot especially created for iPhone users. The company is eagerly waiting to see how many of Facebook’s 1.5 million monthly users will embrace this new convenience. Blitzo is quick to point out that number of players would necessitate a casino four times the capacity of MGM in Vegas.

Slotspot has various themes ranging from swashbucklers to chocolate lovers. Each of the12 themes has a unique set of characters and adventures. There are 40 levels complete with side games, extra pay lines, and expanded plots. At each level, players have the option of sharing coins with Facebook and iPhone friends. Slotspot has been described as being so upscale it leaves Planetoid Inc. in the dust.

Upon log-on, players are welcomed by very colorful graphics, realistic icons, and musical accompaniment appropriate to the theme. There are interesting ways to collect coins aside from those automatically awarded such as challenging friends to earn coins playing along. Each level has 24 pay-lines for which the number of coins and lines in play is up to you. A convenient max-bet tab opens all 24 lines. One unique function of Blitzo’s design is the automatic spin button. Clicking the auto-spin button allows the game to continue while you are away doing everything from running errands to taking a snooze. Auto-spin only stops if there are no more spins available. A handy bar at the top of the screen keeps track of coin balance, score, gifts sent and received, and the level being played.

Modojo Games is happy to announce that London’s Olympics 2012 will never be over unless one elects to remove its game from iPhone. From track to kayak, anybody can become an Olympian. Swimming enthusiasts can attempt to beat the clock timer performing the butterfly or the 100 meter freestyle.

Just in time for the Republican National Convention, Consault is launching a fascinating game allowing players to enjoy a vacation with Mitt Romney and his dog, Seamus during Crate Escape. Bonus points are available to enlist the assistance of other pets to help Seamus since Romney will be too busy chauffeuring Seamus by car, boat, and plane. The official launch date is August 26, 2012, National Dog Day.