Betting on Anything: Baby Betting 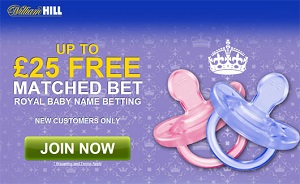 After suspending its Royal baby name betting for 36 hours, bookies William Hill Sports reopened to a flurry of bets for the name Alexandra, seeing the odds fall from 33/1 to 2/1 favourite.

Although the baby’s sex has not officially been revealed, gender betting has been suspended after the Duchess reportedly told a well-wisher who gave her a gift last month; ‘Thank you, I’ll take that for my d…’ before stopping herself, fuelling widespread speculation that she’s expecting a baby girl.

Although the baby’s sex is (currently) off the cards, there’s still a whole host of other royal baby related bets to make. Wagers can be made on almost everything, including the date the baby is born on, the day of the week it’s born on, its hair colour and how Kate will give birth. It’s even possible to place a bet on which magazine will get the exclusive first picture rights to the baby – the current favourites are OK Magazine at 2/1 and Vogue at 4/1, with Nuts and Zoo unlikely outsiders at 100/1 – as well as whether or not the royal baby will share a birthday with Kimye’s baby.

The sudden rush of bets on the name Alexandra seems to have come from nowhere, with some bookies commenting that there may be a ‘royal leak’.