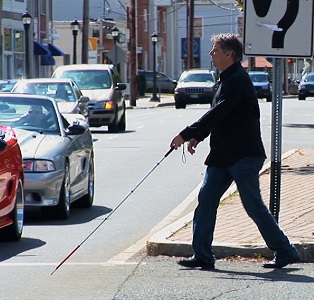 Visually-impaired people might be swapping their guide-dogs and white canes for garments that, for a few tweaks, wouldn’t be out of place in an Andrew Lloyd-Webber production. Apple reportedly registered a patent for smart clothes for the blind in the USA in July.

In this case, smart does not refer to dress code. It refers to intuitive, wearable technology for the blind – and it has been in the making for at least 2 years. The first of its kind, it will compliment current assistive software and devices, such as those that enable the visually impaired to play casino games online.

Reports published in 2015 quoted Intel employee Darryl Adams, who explained plans for a jacket with a built-in environmental sensory system comprised of cameras and 6 sensors. He said the aim of the wearable tech was to help blind and visually-impaired people be more aware of their surroundings, which in turn can help them to respond to possible obstacles or problems.

Adams had good reason to believe in the project. He had first-hand experience with an early prototype, and experienced the difference it made. 30 years prior, Adams was diagnosed with Retinitis Pigmentosa; a degenerative eye disease that left him with less than 20 percent vision. In a bid to see the tech realised, Intel made it open source that year.

What the New Patent Reveals

The patent for the seeing-eye jacket and other wearables registered by Apple has much to reveal. The jacket itself is fitted with not only cameras and sensors, AI, Bluetooth, tactile fabric, and field communication technology.

Users can connect it to their mobile devices, as well as to smart watches. They can also use a hand-held device fitted with front and back cameras, and with tactile material. What’s more, its various components mean its use is not limited to the visually-impaired. It can also be of benefit to people with hearing and speech impediments.

Reports also stated that the wearable technology will have maps and navigational functionality. The AI-enhanced cameras can measure distances and differentiate between various objects, which will be described by voice or touch panels.

The patent reportedly claimed that the cameras are sensitive enough to distinguish between red and green traffic lights. It can also measure the distance between the wearer and the traffic light in question, and it can sense whether vehicles are nearby.

Apple’s patent may well be the next step for wearable smart tech, which has already made an appearance in the healthcare sector.

Smart hospital beds have been introduced into a number of hospitals around the world. The automated beds can make various adjustments to the patient’s position, and are compatible with other smart medical equipment.

A growing number of facilities are replacing their grubby whiteboards with digital boards. They feature patient and other medical information, and are connected to various departments, such as the emergency room.

A perhaps less-impressive piece of health-related wearable smart tech are telemetric devices. Usually worn around the wrist, upper arm, or even around the ankle, such devices can function as step-counters, and can monitor heart rate and other vital signs.

Rather than simply monitoring the wearers, however, the devices can also alert them to possible health risks, if the score calculated from the vital signs drops significantly.

There is little doubt that these technological advances are making a positive difference in the lives of many. However, before anyone rushes out for an amazing seeing-eye dream coat, they might want to think twice about hanging up Old Faithful’s harness.

As great as the tech is, what safety measures are in place, should the tech malfunction or lose a connection to a power source? After all, self-driving cars were being touted as the last word in convenience and safety, until a few of the first owners came to a sticky end.