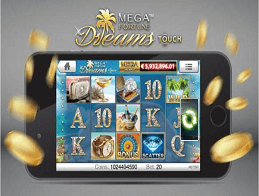 The end of 2016 saw a massive number of substantial mobile slots jackpots being paid out to players across the globe. Now, to mark the beginning of a new year of winning potential, a UK-based player has hit the jackpot while playing a popular mobile slot at just £1.25 a spin.

The player in question, who is based in the English town of Cheshire, scored a jackpot of over £6.2 million while he was playing the Mega Fortune Dreams mobile slot from his smartphone. Mega Fortune Dreams is the latest title in software provider Net Entertainment’s Mega Fortune series – a collection of progressive jackpot slots renowned for paying out large cash wins.

Although the player has chosen to keep his name under wraps, he has been interviewed by the press which released details as to how he feels about his win, and what he plans to do with his massive jackpot payout.

SBC News interviewed the winner after his jackpot windfall and according to a press statement he plans to take his family on a Disneyland vacation with his winnings.

The lucky winner also noted that when he saw the amount that he had won he was admittedly struck with both shock and disbelief, and was not sure how to react. The win, he said, has been life changing for both himself and his family, and has provided security for their futures.

The Mega Fortune Dreams mobile slot is available at most licensed Net Entertainment mobile casinos. Based on a theme of glitz, wealth and luxury, the slot features symbols like expensive gold watches, champagne, and sparkling diamonds.

There are also some astronomical progressive jackpots on offer, and it was one of these jackpots that transformed the recent UK-based winner into an instant millionaire. The main jackpot game in the slot is triggered by landing three Bonus Wheels on the centre reels, and offers four progressive levels with the largest prize hidden on the final tier.

Yet Another Big Win

Not long ago in November, another player from Sweden struck a jackpot of over €4 million while playing the same progressive slot at Maria Casino. A British winner also struck it lucky in the NetEnt game, landing a jackpot of £60,000 while playing what he believed to be a free mobile slot game at Leo Vegas!

Commenting on the latest big win of £6.2 million, Simon Hammon, the Chief Product Officer at NetEnt, said that his company’s Mega Fortune slots have again made another player’s dreams come true. He went on to say that NetEnt is excited to be able to create multi-millionaires, as well as allowing online casinos to change their players’ lives.