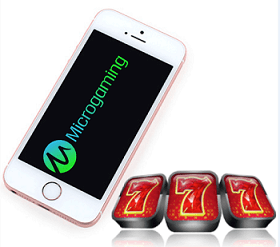 Renowned Isle of Man based online casino software developer Microgaming has announced that they will release three new slots optimised for mobile in January 2017. It’s been a while since 3 slots were released at once, and even longer since they were all available for play on the go. This time round, a mix of games will be on offer, with a tried and tested slot, a classic slot and a wild card all making their debut officially on smartphones and tablets.

Life of Riches, Immortal Romance and Huangdi – The Yellow Emperor will all be available for play on iOS, and players will be able to download the games or enjoy them in browser.

Strictly speaking, Immortal Romance isn’t a new slots game, but it’s finally being optimised for mobile play, making it quick to download. A 243 Ways to Win slot that boasts an incredible storyline of forbidden love between a vampire and a mortal, Immortal Romance has been a huge hit with players since its desktop release over a year ago.

Mobile players will now be able to enjoy all the action and intrigue Immortal Romance has to offer on iPhone and iPad, and this game will be more accessible than ever before. Similar in setup to Thunderstruck II, another popular online slot that has already been optimised for mobile, Immortal Romance is sure to become even more popular after its January release.

Living it Up with Life of Riches

Life of Riches offers something more of a classic gaming experience and some players may find that this game is a little too similar to others in the same genre. The theme of the game closely echoes Microgaming’s earlier slot release, High Society, but seems to feature even more wealthy women enjoying a life of luxury.

Life of Riches offers the golden trifecta of bonus features, and with Scatters, Wilds and Free Spins in play there will be plenty of winning opportunities up for grabs. The games jackpot is also set at healthy $120,000, making this slot a good option for those who enjoy the tried and tested recipe.

In contrast, Huangdi – The Yellow Emperor looks set to offer something completely different and its almost certain that this game will once again cement Microgaming’s reputation for creating innovative slots that are designed to thrill.

Huangdi – The Yellow Emperor is set during the battle of Zhuolu which took place at the dawn of Imperial China and the dramatic graphics, sound effects and animations perfectly captures the era’s tumultuous atmosphere. This new slot is highly anticipated and it’s sure to be a huge hit with iPhone players.

January 2017 is just around the corner, and with 3 new Microgaming slots games ready for mobile release, the year looks set to get off to a great start.